Master Graduation September 2017 – One of the major challenges that low income countries have been facing for decades is to attain food security. The project covered in this report investigates how solar adsorption refrigeration technology can be used to achieve a higher level of food security in West-Africa. More specifically, the study aims to conceptualize suitable product proposals that integrate the technology in order to improve food security, be profitable and provide a more environmentally sustainable alternative to current food conservation practices. To this end, the principle of food security is explored. Technological and contextual researchis subsequently executed. Findings are incorporated in the design phase during which 3 concepts are proposed and evaluated. The most promising concept, the Solar Stall, is detailed in the embodiment phase.“Food security, exists when all people, at all times, have physical, social and economic access to sufficient, safe and nutritious food that meets their dietary needs and food preferences foran active and healthy life” (US Global Change Research Program et al., 2015). Solar energy based refrigeration means can improve food security in two manners. Firstly, solar powered refrigeration presents the opportunity to adequately preserve produce, extending shelf life and therefore reducing produce loss due to spoilage. A reduction of produce loss in turn provides a higher level of food security. Secondly, solar powered refrigeration can enable anincrease in domestic food production, which has a major impact on food security. These two components are leading parameters throughout research and conceptualization.Solar adsorption refrigeration utilizes the processes of adsorption and evaporative cooling to provide refrigeration. These processes are driven by temperature fluctuations within the system, which are instigated through solar heat capture. The main advantage of solar adsorption refrigeration is that it has the potential to be very cost effective, making it particularly suitable for low income coutries. Its main disadvantage is a relatively restricted efficiency caused by poor utilization of heat to trigger adsorption. The underlying reasons areaddressed within the technology section of this report. The state of food security differentiates among all nations in West-Africa. The contextual research that was performed during this project therefore looks at both Ivory Coast, which is considered to exhibit a high degree of food security, and Liberia, which is considered to exhibit a low degree of food security. An understanding of these extremes allows to establish a spectrum of data that is representative for the entire West-African region. The value chains of perishable goods of both countries were analysed. Based on early findings, the researchis narrowed to specifically consider the retail link of the value chain, where produce is sold in open-air markets. The research concludes that the stimulation of domestic food production in countries with a state of food security similar to Liberia, should be the main objective ofthe product proposal. Furthermore, the research points towards fish and meat retailers in the open-air markets, which supply the general public with their daily groceries, as the most beneficial target group.Three suitable concepts have been developed and evaluated based on their impact in terms of food security, profitability and environmental sustainability. The Solar Stall substitutes the current market stall and incorporates a cooled compartment for produce conservation. This concept was considered to comply best with the specified requirements and was thereforedetailed during the final stage of the project. 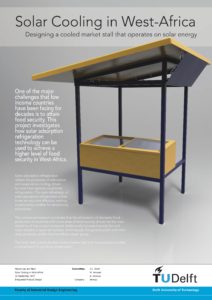 Healthcare for All Diagnostics for All